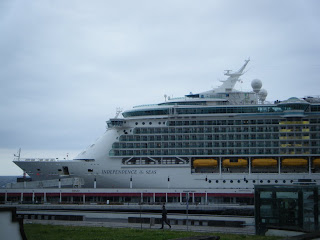 “This is not a Death Certificate”

That’s what it said at the top of the Guest Removal Form I was filling out in the infirmary of the cruise ship the Independence of the Sea. The nurse gave me the sheet and asked me to sign it. I was about to when I suddenly saw that statement about how the form wasn’t a Death Certificate. That gave me pause.

I started reading through the form more carefully at that point. On the first side, there wasn’t much that you wouldn’t expect. The infirmary and the cruise line wanted my name and address and such, and I was prepared to fill that in. I had agreed to leave the ship to see a cardiologist in Lisbon, and that was the kind of information I knew the cruise line would need.

I needed to see a cardiologist because just the day before after walking on the ship's jogging track for about 30 minutes something weird happened. When I got down to my cabin to take a shower, I suddenly started sweating. I didn't know where that was coming from. The walking I did on the jogging track was pretty mild, and I hadn’t been sweating earlier when I was walking on the track. There was a pretty strong wind the ship was moving into and it whisked the sweat off me. Plus I was wearing my new micro-fiber hat and t-shirt and shorts and they all promised me that if I bought them I wouldn’t sweat and if I did I wouldn’t feel it.

But there I was in my cabin sweating.

I was waiting for Linda to get back from the fitness center, and I knew I had to stop sweating before she got back and we went off for breakfast. So I figured I would walk onto the balcony and cool off. It was always cool there, getting plenty of that wind that the ship was heading into, and I stepped outside and tried to dry myself off, but I just started sweating more and more, and I realized I was having trouble breathing so I sat down, but that just made my breathing harder and the sweat pour out of me faster.

Then I went into the shower and turned on the cold water, but that didn’t do any good. I was still sweating like an Arkansas hog.

I’d been sweating and having trouble breathing for ten minutes, and suddenly I noticed that my heart was beating at a clip. I jumped out of the shower and grabbed my wristwatch and tried to time my pulse.

But I couldn’t keep track of the beats because I couldn’t count that fast.

Listen, you know you’re in trouble when you can’t time your pulse because the beats are coming too fast. As soon as you try to count 100 beats, you know you're missing dozens of other beats. Nobody can count that fast.

I knew I couldn’t get to the infirmary on the first deck without Linda, so I sat down naked in the middle of our cabin and waited.

Thank God, she didn’t stop to gamble in the casino.

She saw me there sitting on the chair, sweating, naked, and she said, “What’s wrong.”

She called the infirmary and told them we were coming down.

I threw on my t-shirt and shorts and started walking down the corridor to the elevators. Linda said, “You don’t have your shoes.”

I didn’t go back to get them. I just kept walking.

We got to the infirmary and the place was packed, but the nurse looked at me and told me to sit down and took my pulse and then helped me to the emergency room. The doctor came in, and she took my pulse too and couldn’t believe it. 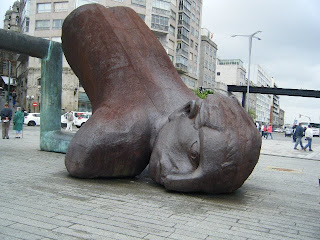 The injection was amazing. As soon as the doctor shot it in my vein, she asked me how I felt, and I paused my shaking and beating and sweating to see how I felt, and it was like I could feel whatever it was that she gave me moving through my body like a slow stream, up from the vein in my arm, across my chest to my heart and up my shoulder, and up and over my neck to my lips and eyes and brain. A slow steady rising stream of ease that calmed down all that bounding my heart was doing.

After that, for the next 6 hours they ran tests and had me resting between them, and what they found was that I had had a cardiac arrhythmia with an atrial fibrillation and elevated levels of cardiac enzymes.

After the tests, they told me that I had had a heart attack and that I should definitely see a cardiologist at the next port, Lisbon.

As you can imagine, I thought that was a good idea, and the next morning, Linda and I were in the infirmary, and I was filling out the necessary paperwork for leaving the ship so I could see the cardiologist.

That’s when I was stopped by that phrase “This is not a Death Certificate” on the top of the page, and I started to read the form carefully.

The second page made it clear that if I filled out the form and left the ship it was possible that I might never be able to get back on it. The cardiologist in Lisbon could declare me unfit to travel if he thought I was too weak. In which case, I was stuck in Lisbon.

For that matter, I didn’t want to die anywhere. Death was not something I wanted to be seeing in my future. Three of my friends had died in the previous month, and I didn’t want to die. I had this crazy idea that if I could stay on the cruise ship I would be healthy and swell and the atrial fibrillations would never come back.

I figured that not filling out the form that said “This is not a Death Certificate” and not leaving the ship to see the cardiologist was the best way to go, and I told the nurse that. She was a very nice person, from the Philippines, and had been with me throughout my tests, and when I told her that I wasn’t going to see the cardiologist she said in her Spanish accent, “You must see the cardiologist. I know how you were when you came in. It was bad. You weren’t like this, standing and breathing like a living man. I see you now and you think you are better, but when I saw you then you were very bad, and I feel you still are.”

“I can’t tell you what do to, but if I were you and had been that sick, I would leave this ship, see the cardiologist.”

I said it again. “I don’t want to leave the ship.”

I smiled and shook her hand and said, “I hope I don’t see you again.” 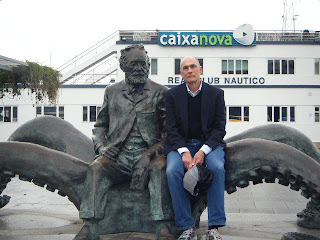 PS--Linda took all three photos. The last two are of sculptures in Vigo, Spain, two days after my heart attack.

In the last one, I'm sitting next to a statue of one of my boyhood idols Jules Verne.
Like me, he visited Vigo once.

PPS--I'm seeing my doctor tomorrow and the cardiologist on Thursday.
Posted by John Guzlowski at 3:49 PM 28 comments: Links to this post

You want to do poetry a favor?

Buy a book of poetry by a living poet.

If you don't know any and need some suggestions, buy something by Jared Carter or Lola Haskins or Bruce Guernsey or Charles Fishman or Charles Swanson or me.

It's easy. Just click on one of the names above.

Or if you don't want one of those books take a look through my Writing the Polish Diaspora blog or Writing the Holocaust. I'm sure you'll find a poet you'll like.
Posted by John Guzlowski at 7:44 PM 1 comment: Links to this post