Charles Swanson's "After the Garden: Selected Responses to the Psalms"

When my mother was dying, I spent a lot of time in the hospice with her. She had had a stroke, and she couldn’t talk or move. The doctor didn’t even think she could hear me or understand what was happening to her. It was quiet and lonely and sad there with her in her room. Sitting near her, I sometimes talked to her, and sometimes I read the bible. 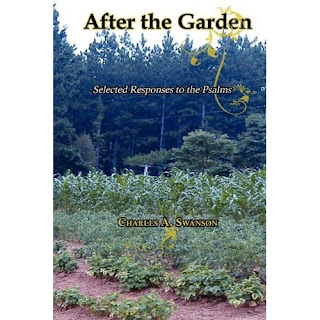 There was a copy in the waiting room, and I had carried it back to my mom’s room. I’m not religious, but I found myself reading the bible, especially the psalms.

I had always loved their poetry, ever since I studied them in a Colonial American Lit class in college. I’m not the kind of person who likes to memorize poetry or much of anything else, but I sat down as a student and memorized some of the psalms.

Reading those poems of love and grief, sadness and light, I sat near my dying mother and thought about how much truth and longing there was in them. I said to myself that maybe someday I would try writing poems about the psalms, try to write something that would carry something of what I found in them.

After my mom died, I did try to write those poems. Over and over and over again I tried, but I couldn’t do it. I don’t know why, but they didn’t come for me.

But they did come for Charles Swanson, a fine poet I met here in Virginia. He lives about thirty miles north of Danville and teaches high school in Gretna. He also pastors the Melville Avenue Baptist Church in Danville.

Charles has written a series of poems that respond to the psalms, and those poems are now included in his first book, After the Garden: Selected Responses to the Psalms.

The poems in this book take us back to the true roots of poetry, to its source in prayer, music, and the lives of ordinary people who struggle to make sure that the ones who come after them are able to live lives of freedom, hope, and faith. In these beautifully-shaped poems about growing up and living in the Virginia Piedmont and Appalachia, Swanson turns ordinary lives into extraordinary prayers.

Here’s the title poems from his book:

After the Garden: What Does It Mean, the Killing Fields?

For I know my transgressions,
and my sin is ever before me.
Psalm 51:3, RSV

Now this is the truth:
If there is sin, sin beyond
the thorns and the sweat of the brow, then
I have eaten.

We ran through the swamp woodlands,
blasting hummocks of litter like puffballs,
the bunny zagging through patches of light,
my mother with the twenty gauge,
I with a mouthful of marbles,
hard questions that choked me.
She shot a log from under his leap—
mossy wood showering green fireworks,
the somersaulting figure
an acrobat landing on his feet.
He slipped the skin of earth,
in the hollow trunk of a tree.
Putting aside the gun,
she reached a long arm up to armpit
into the mystery of darkness
to grasp his warm hind foot,
pads like buttercups, smooth as wax.
He came out lank, sinews stretched,
long last the tender twitching ears.
We sank onto the mossy log
damaged by her errant shot
and she laid the rabbit along her lap.
Her left hand gripped his feet,
and with her right she swaddled his head
in caress or stranglehold.
The rabbit made a squeaking noise
and I choked out
one hard marble. “Mama,
what will you do?”
A practiced hand made the wrenching sound.

These are the killing fields.
Out of the milk of human kindness
I have been fed.

Charles Swanson's book is available through his publisher, Motes Books, and through Amazon.

The Motes Books site has more information about Charles and includes another poem.

This November, Finishing Line Press will be publishing his second book, a chapbook entitled Farm Life and Legend.
Posted by John Guzlowski at 10:24 AM 2 comments:

Labels: After the Garden: Responses to the Psalms, Charles A. Swanson, hospice

Hercules has appeared in TV shows, movies, Disney cartoons, comic books, and even Disco Battles, but for a long time there hasn't been an epic poem focused on this hero.

Sure there may have been such a poem in ancient times. There are rumors on the internet that Peisandros of Rhodes (c. 600 B.C.) wrote such an epic but the thing is apparently "lost," and there are some scholars who figure that this epic was just something dreamt up by Peisandros's PR man to pump up his reputation.

All of this is changing, however. My friend, Matt Flumerfelt a fellow originally from New York who is wild about rhyme and Ancient Greece and Hercules, is in the process of completing an epic poem based on the life of Hercules and the poem (or at least XIV books of the epic) is available online at Matt's blog, Baloney Emporium.

Here's a sample from book XI with a brief introduction by Matt:

I’ve always been rather proud of this section, when Hercules goes to the ends of the earth and the Garden of the Hesperides to retrieve the golden apples for Eurystheus. In this section he’s crossed the desert and begins to reach the garden.


For days on end Alcides faced
the barren waste without the taste
of food or water, trudging west,
his gaunt cheeks hollow as a ghost.
Sporadic tufts of stoic greenery
intruded on the sabulous sea,
infringing on the sterile scenery
till dunes gave way to luscious lea.
The air grew vibrant with the song
of birds, the murmuring of leaves.
A vernal ichor, young and strong,
made zaftig earth's eclectic entities.
He abutted on a crenellated wall,
a bulwark reared of rough-hewn megaliths
with barbicans to guard against assault,
though here were neither Gauls nor Visigoths.
Such monumental piles of stone
have mostly been reserved for those
whose dainty nates graced a throne,
their egos perilously grandiose.
Tracing the wall's periphery,
he came to a quaint embrasure,
a portal of azure porphyry
with an elaborate entablature.
He gave the door a gentle push,
surprised at finding it ajar.
It swiveled open with a whoosh
as wind swept through the aperture.
The fields unfurled before his eyes
were named for the renowned Hesperides,
praised in the lays of other days
as Dilmun, Eden, Asgard, Paradise.

Atlas' daughters roamed the meadows,
weaving chaplets to adorn their tresses,
trolling airs and three-part operettas
whose harmonies and graceful cadences
were sweet as honey from Hymettus.
Spring, that Dionysian season,
was perpetual, reason being
the garden's pivotal location,
beyond the range of winter's fang.
Ladon was the garden's sentry,
a reptile of outstanding parts,
a member of the dragon gentry,
past master of the mantic arts.
Crossing the intervening croft,
Alcides reached earth's finisterre,
where Atlas held the world aloft,
though what he stood on isn't clear.
Heracles was frank with Atlas,
explaining in plebeian phrases
what he wanted with the apples
and why he'd made his anabasis.
"Why stick your neck out?" Atlas said.
"That dragon's like a pet to me.
He's sweet as lamb’s milk when he's fed.
I'd fetch the apples if my hands were free."
Rather than face the dragon's wrath
and slay so mannerly a creature,
Alcides chose to prop the earth
while Atlas took a little breather.


Putting his shoulder to the wheel,
he hoisted the telluric sphere.
If Heracles had dropped the ball,
life might have ended then and there.
Atlas lolled about the meadow,
feeling like a pardoned felon,
lounging in a live oak's shadow,
munching chunks of watermelon.
This taste of the dolce vita
fired Atlas with a love of gold.
A life of leisure is sweeter
than playing caryatid to the world.
Instead of dealing with the dragon,
he got the apples from his daughters,
who plucked them to relieve the sagging
branches, hoarding them like staters.
Atlas, returning with the booty,
told Heracles peremptorily
he felt it was his bounden duty
to take the apples to Mycenae.
Alcides said he understood
and only asked the Titan leave
to put a cushion on his head
for reasons easy to conceive.
It seemed a sensible request,
so Atlas graciously complied
and briefly reassumed his post
after laying the fruit aside.

Heracles swept up the plunder
and booked without a backward glance.
Atlas recognized his blunder
and reviled him from a distance.
His journey seemed incredible
to the simple folks back home until
he showed them the inedible
fruit. Even then most doubted still.
Eurystheus admired the apples,
but they had a bad track record.
Anyone who touched the globules
was jinxed by the goddess Discord.
He foisted them on Heracles,
who fobbed them off on Athena.
She passed them to the 'sperides,
who socked them away for Hera.

Matt is also the author of The Art of Dreaming, a book of poems. Info about purchasing it and a sample poem are available here at Everything's Jake.
Posted by John Guzlowski at 12:35 PM 3 comments: